Life is hard.  And if life is hard, it follows that

A better tomorrow is not inevitable.  Progress is not served up to the organization on a silver platter.  There are no four-lane highways to the future.  The future does not arrive on time at the beck and call of the leader.

Even a well-communicated and compelling vision linked with brilliant strategies may take years to produce results.

Things may get worse.  The months and years ahead may be profoundly disappointing.  Seemingly immovable obstacles halt the most determined among us.  It’s a good bet that the resolve of some and at times, entire organizations, will dissolve well short of the Promised Land.

A new tomorrow must be wrestled from the clutches of a stubborn and subversive today; a status quo full of “no.” These negations come in the form of a thousand points of push back, some small and merely bothersome, but others more formidable.  This array of resistance is strenuously opposed to progress.

If the trip were easy, you would already be there along with a multitude of others.

In light of these sobering realities, leaders need to keep two things in mind along the way to the future.

Once the vision is announced and the strategic framework is set, the “impatience clock” begins ticking.  A few may quit at the first signs of difficulty.  Some may grow cynical and infect the community with a spirit of pessimism and resignation to the status quo.  And still others may lose heart and hope, and eventually quit out of sheer fatigue. This is all to say that the months and years take their toll, especially when there is little or no progress to show for your work and sacrifice.

Second, there’s not a lot you can do about the first point.

The cold truth is that the journey to the future is much, much, much more difficult and takes much longer than most of us care to admit and that few of us realized in the more optimistic, beginning stages of the journey.

The timetable for progress is impacted by a multitude of variables, many of which delay progress and most of which are out of the control of the organization and its leaders.  There’s a lot of time for a lot to go wrong.

As I consider the inherent difficulty involved in accomplishing anything of lasting value, I take comfort, albeit a perverse comfort in the hard words of T. S. Eliot’s 1925 work, The Hollow Men.

Every leader who aspires to make a difference in a fallen world—a world not merely indifferent to our best intentions, but radically opposed to them—should take this literary masterpiece to heart.

I quote The Hollow Men in part, beginning with the fifth movement.

Here we go around the prickly pear

Here we go around the prickly pear

At five o’clock in the morning.

For Thine is the Kingdom 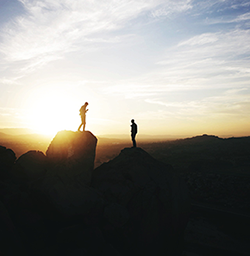 For Thine is the Kingdom

For Thine is the

Not with a bang but a whimper.

About the Author: Mark McCloskey

Mark is a graduate of Miami University (BA) and Bethel Seminary, Minnesota (MDiv). He earned his PhD at the University of South Florida in the College of Education, Department of Leadership Development. His focus of study was organizational leadership, adult education, and research and measurement.

View all posts by Mark McCloskey →

View all posts by Mark McCloskey →